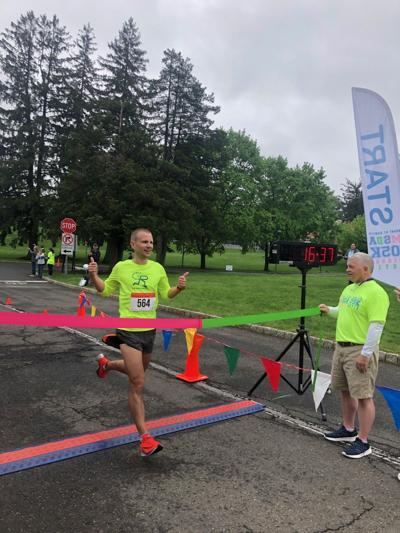 Stuart Haynes is the first runner across the finish line in the fifth annual Meghan Doyle ’05K on Saturday, May 4. His time was 16 minutes, 37.8 seconds. At right is Bill Doyle, father of Meghan Doyle, a Mount St. Dominic Academy graduate who died at age 26 in May 2013.

CALDWELL – With more than 200 people taking part, Mount St. Dominic Academy hosted the fifth annual Meghan Doyle ’05K, a 5-kilometer run/walk commemorating the life of a member of the Class of 2005, on Saturday, May 4.

Registrations grew 20 percent from a year earlier, and the number of members of the organizing committee has tripled since the race’s inception. The number of volunteers this year also was more “than we’ve ever had before,” said Sister Fran Sullivan, the Mount’s Head of School.

“Some of our students are out on the course, welcoming people and pointing them in the right direction. The softball team is out there by the water station, and the lacrosse team is running (in the race). We really made an effort this year to involve our own school community as well as the local community,” she added.

Rachel Isaac, friend of the Doyle family, participated in the 5K to have fun and unite with other members of the Caldwell community.

“It’s nice to be at a local community race and be here to support the community instead of just being here for yourself,” Isaac said.

All proceeds from the event went directly to the school’s Financial Assistance Program, which makes it possible for more young women from New Jersey to attend the all-girls Catholic high school.

The course ran through neighborhoods surrounding the campus of the Mount and Caldwell University. In celebration of the event’s fifth anniversary, all finishers received a commemorative medal.

To attract more professional runners to the event, which is a certified USA Track & Field Grand Prix 500-point race, the Mount this year introduced cash prizes for the top female and male finishers: $250 for first place, $100 for second place and $50 for third place.

Stuart Haynes, qualifying in the age 40-49 group, placed first overall with a time of 16 minutes, 37.8 seconds.

While Haynes “used to think running was stupid,” today he is a Masters Runner who participated in the event in his eagerness to “get ready for the 5K season.”

“I’m fresh off the Boston (Marathon) so my legs are a bit mushy. But I just love the atmosphere of both the small races and the big races,” he said.

Kouros Sadeghi-Nejad, qualifying in the age 19 and younger group, was the next to cross the finish line at 17 minutes, 59.8 seconds.

The morning of the event, Sadeghi-Nejad, who aspires to “grow up and be just like (Haynes),” ran in the Running 4 Answers, a 5K to raise money for Alzheimer’s research, in Roseland.

“Just running regularly, I find it to be a good emotional release. It brings a lot of clarity,” he said. “And when you do something like a race, I think it’s very nice to do it for an important cause. And this is a great cause. I think if you can use your talents to benefit the community, it’s a really nice (bonus).”

In May 2013, Meghan Doyle died unexpectedly from a viral infection at age 26. Shortly after her death, the Doyle family discovered a bucket list with 10 goals that she wanted to accomplish, including becoming more involved with her high school alma mater and completing a five-kilometer race.

Doyle’s mother, Ginny, met with Sullivan to share her idea for an event to honor her daughter’s memory by grouping the two objectives. Together, they founded the Meghan Doyle ’05K, which first took place in May 2015.

Kate Sullivan, the Mount’s alumnae director, said, “(Doyle’s) idea was to create this inspirational and spirited event that would directly benefit other young women who wanted to attend the Mount. Continued success of this annual event allows us to welcome more and more young women to our Mount community and benefit from some of the same experiences that Meghan had during her time at the school.”

In serving as a peer leader, a Eucharistic minister, a yearbook committee member, and a manager of both the swim and basketball teams, Meghan “went from a secretly shy eighth grader to a confident young woman,” her mother said.

“(The Mount) really molded her and helped her gain confidence, and I think that’s one of the benefits of single-sex schools and high schools. She really blossomed there.”

Doyle arranged for the event to benefit the Financial Assistance Program. “It is getting to the point where families have to make a choice of whether or not they can afford to send their children to private school,” she said. “I think this year, there are 30 students that are receiving financial aid. Every year, we hope it grows a little bit more.”

Sister Fran Sullivan said, “(The program) encourages our future and keeps our legacy alive. It’s like a meshing of the legacy of the past with the present, leading into the future. It’s like the perfect storm.”

Ginny Doyle also co-founded the event to encourage the Mount’s alumnae to support their alma mater.

“If this is the school that will help them get into great colleges and help them get great jobs and be successful, then they have to come back and thank that school,” she said.

Jessica Hanselman attends the event every year to honor her friend alongside other graduates of the Class of 2005.

Kate Sullivan said the Mount “is so grateful to the many people who help make this event such a success year after year.”

“From the Doyle family, our event committee, staff and students, to the police departments from Caldwell and Essex Fells, to our generous sponsors and all those who run and walk this race – they all help make a difference in the lives of the young women who attend the Mount,” she said.

Sister Fran Sullivan expressed her appreciation for how the event “brings the community together and keeps (Meghan’s) spirit alive and moving into the next generation.”

“It honors (Meghan’s) desire to do something for the school, for the future of the school, by enabling other students to come here and be part of the Mount,” she said. “I think that’s what would make her very happy: to know that because of her experience here, life really does go on. It’s a way of saying that life doesn’t stop. It continues and gets richer as the moments go by.”

Ginny Doyle emphasized how the race represents “an excellent opportunity for the Mount community and the community at large.”

“It’s a great opportunity for people in the community to do something good and something that they enjoy,” she said.

Return to All News Page