IN THE NEWS: Elite N.J. School Needed a Diversity ‘Wake-up Call.’ New Board Members are Making it Happen

“We had this conversation the other day about Jesus, his inclusiveness, and I think that’s what that symbolizes to me,” said Sullivan. “Whoever walks through that door is a viable, valuable person.”

Castor, a 2001 graduate of “the Mount,” as the elite Catholic high school for girls is known, agreed with Sullivan’s interpretation of Christ as a uniter.

In that sense, the need for Mount St. Dominic itself to be more Christlike is something else that Castor and Sullivan agree on, and have vowed to work on together.

When the Board of Trustees convenes its July meeting via Zoom on Monday night, Castor, 37, will be one of two new members hoping to help usher in a new era of diversity, equity and inclusion at the 128-year-old Catholic high school for girls.

Castor’s appointment is a direct result of the calls for racial justice that have echoed across the country and through the hallowed halls of Mount Saint Dominic in the wake of George Floyd’s death in police custody in Minneapolis last May. The Mount was among elite prep schools where Black alumni petitioned for reforms and took to social media to share their experiences being demeaned by cruel or ignorant classmates, treated unequally by teachers, steered away from elite colleges by guidance counselors, and mistrusted by administrators.

Sullivan, an Irish Catholic in her late 70s, who graduated from Mount St. Dominic in 1960, was just one of the school heads to express their contrition. She wrote in an open letter last month, “We have made mistakes, and have been blind to what has been within our sight. For this, I sincerely apologize.”

To support her reform efforts and further represent students of color on the 16-person board of trustees, Castor immediately recruited another alumna, the Class of 2008′s Ghilianie Soto of Kearny.

Castor, a real estate developer from West Orange, is Black and of Haitian descent. Soto, 30, a publicist who lives in Kearny, is Latinx, her mother from the Dominican Republican and father from Puerto Rico.

The two are the first alumnae of color to serve as trustees since L. Grace Spencer of Newark, who only served a year on the board earlier this decade but had to step down due to other obligations.

As alumnae, Castor and Soto will bring their first-hand experiences of having been teenage girls of color and modest backgrounds among Mount Saint Dominic’s predominantly white and, for the most part, economically privileged student body.

“It will help all of us on the board who happen to be Caucasian men and women to get to understand more about the issues we’re talking about,” Sullivan said.

Castor said a long-term goal of hers is to increase representation of people of color among both students and faculty. For example, she would like to recruit from beyond the Catholic elementary schools in Essex and surrounding counties that have traditionally been MSDA’s feeders.

Along with that recruitment effort, Castor hopes to increase fundraising for financial aid, which now accounts for about 10% of the $19,975 annual tuition and fees.

“It’s going to take time for us to achieve the diversity and also increase the amount of resources that we’re able to provide to folks who may be in different socio-economic positions than their peers,” Castor said.

Soto said that because of her own working-class background, she felt more of a class divide than racial or ethnic lines at Mount Saint Dominic.

“I was poor,” said Soto, who went on to Syracuse University and a career in public relations. “My goal is that every little girl that walks into that school who feels like an ‘other,’ feels like and sees that she has a network of support of other women that look like her, and come from similar backgrounds.”

At MSDA and other private schools, some alumni have distanced themselves financially and otherwise from their alma mater because they felt marginalized while attending. Soto, Castor and Sullivan all said a key reason MSDA must reform itself is to earn the loyalty of its alumnae of color and their financial support.

As the head of school, Sullivan has been the focus of pent-up anger among Black alumnae, some less conciliatory than Castor.

One of her critics is Chelsea Greene, a 2016 MSDA grad who was involved in the creation of a “Black at MSDA” Instagram page, where students and alumnae have recounted painful experiences of racial ignorance, insensitivity, or microaggression from white classmates and even faculty.

Greene was among 36 alumnae, along with Castor and Soto, who signed a June 11 letter to school administrators demanding reforms, including the appointment of a trustee of color. In spite of the pair’s appointments, Greene remained skeptical that Sullivan would embrace and implement real reform at Mount Saint Dominic, where Greene said Sullivan had ignored pleas for reform in 2016.

“I’m very optimistic about these two women being added to the board,” Greene told NJ Advance Media in an email. “My biggest concern will always be with Sister Fran herself and her willingness to grow and receive these stories and make the changes.”

Sullivan acknowledged that she had not reacted strongly enough to past calls to address racial bias on campus.

“A lot of it is hard to hear, difficult to hear,” Sullivan said. “But I, as well as many people, need a wake-up call. And I think this is an opportunity for that. And the real hope is that we don’t just let this die out, that we take this and we take positive steps and move forward.” 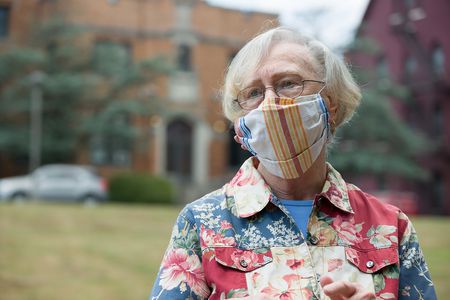 Return to All News Page